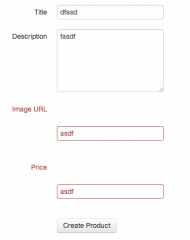 This does mostly work but now we have presentation logic mixed into the configuration of the view action handler. There has to be a better way, and there is! But first, why doesn't that solution completely work for me? Well, the reason is because even though i now have my desired class name, the handler wraps <div> blocks around the label and the input ... and that breaks the horizontal alignment of the offending controls. (See image.) Sure, you may not mind it but the $Client is surely going to sooner or later. Plus, the placement of the solution itself is totally unideal. What if there was a way to build in TB support like with a magical gem or something ... turns out there is ... to be continued ...
I went ahead and uploaded my first RoR project to github: http://github.com/jeffa/RoR-Depot This project is simply the example web app from Agile Development With Rails (4th ed.). I am sticking very closely with the instructions but i am using Twitter Bootstrap instead of the author's stylesheets. I am also using Travis CI so i am getting some experience with basic deployment issues: http://travis-ci.org/jeffa/RoR-Depot I have a few issues to solve before i should move on, such as obtaining fine control over which stylesheets and javascripts are included and which order they are included in; discovering a proper way to call rake db:migrate - right now i am using a hack:
Vim
This works and even though bundle install will be implicitly called (again), the build process is aware this instruction has already been run and does repeat the instruction. But it's a hack. There is a proper solution ... 🙂
I recall (Central Park in fall ...) man i digress. I recall attempting to learn Catalyst many years ago and being hit with a lot of arcane rules and well ... just plain bizarre usage of Perl in general. I didn't like Mason nor Krang very much either but i managed to learn them. Catalyst just seemed ... nasty. Well, now i really feel like i was correct. Catalyst sucks. And so does Class::DBI for that matter. Ruby on Rails and ActiveRecord blow each counterpart out of the water, respectively. These commands, with no need to edit any code, produced a full MVC driven CRUD interface for a fictitious "products" database (SQLite):
Shell
So far i am sold on Ruby/Ruby on Rails ...
Looks like I am finally making the switch away from Perl. I starting learning Ruby yesterday and so far it is everything i wanted from Perl 6, which has yet to see the light of development day. I am also enjoying Ruby far more than Python, a language i still somewhat despise. The following quote from the 2nd Edition of Ruby Programming by Dave Thomas illustrates why i prefer Ruby over Python:

... Ruby is a transparent language. When you write a Ruby program, you concentrate on getting the job done, not on building scaffolding to support the language itself.

Although $ and @ are used as the first character in variable names sometimes, rather than indicating type, they indicate scope ...

But the latter quote warrants further discussion: Ruby is not afraid to use sigils like Perl (Python) but it is also not afraid to challenge the fundamental design choices that i feel really matter as opposed to ones that otherwise serve egos (Perl6). I am not saying the Perl6 community did not make fundamental changes, they did. I am saying they made the wrong changes/choices. Speaking of which, what you just read are all my personal choices/opinions. And as such i don't have to defend them. But i do want to announce that from this day forward i am serious about Ruby.